About the Bouvier Des Flandres 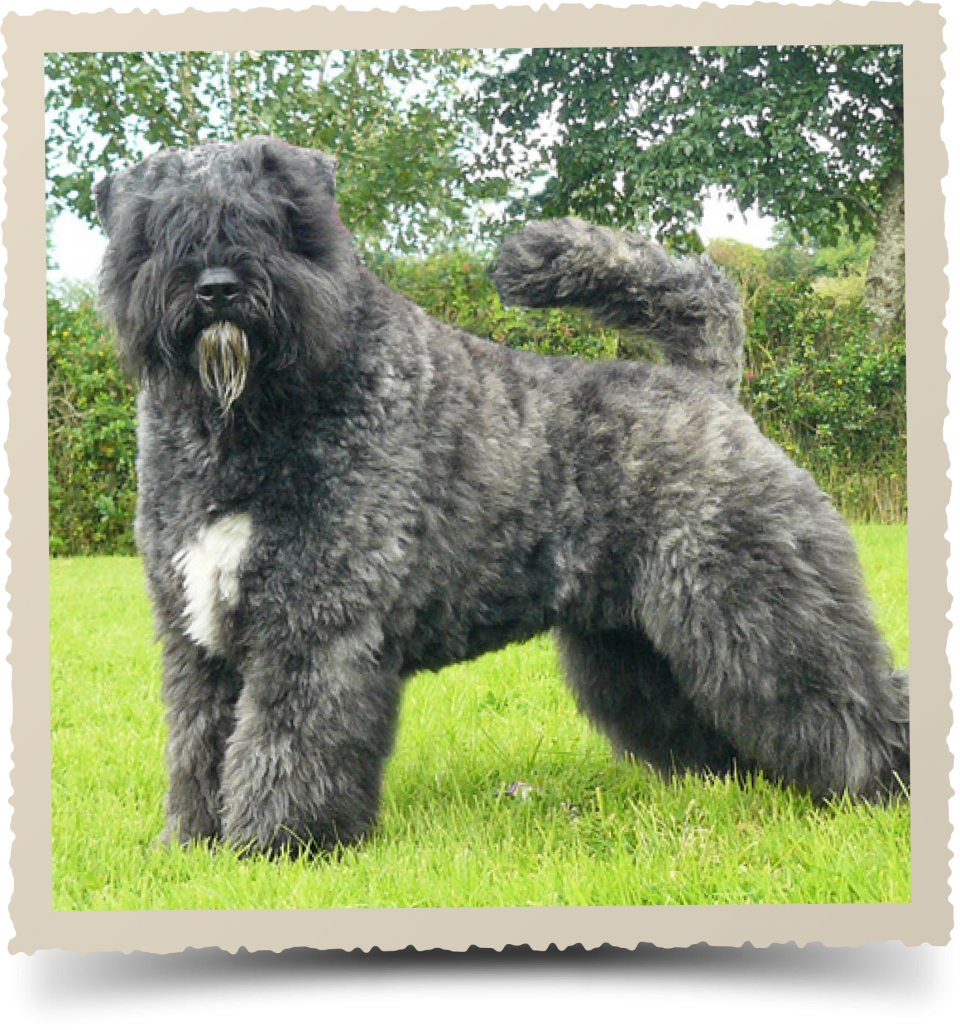 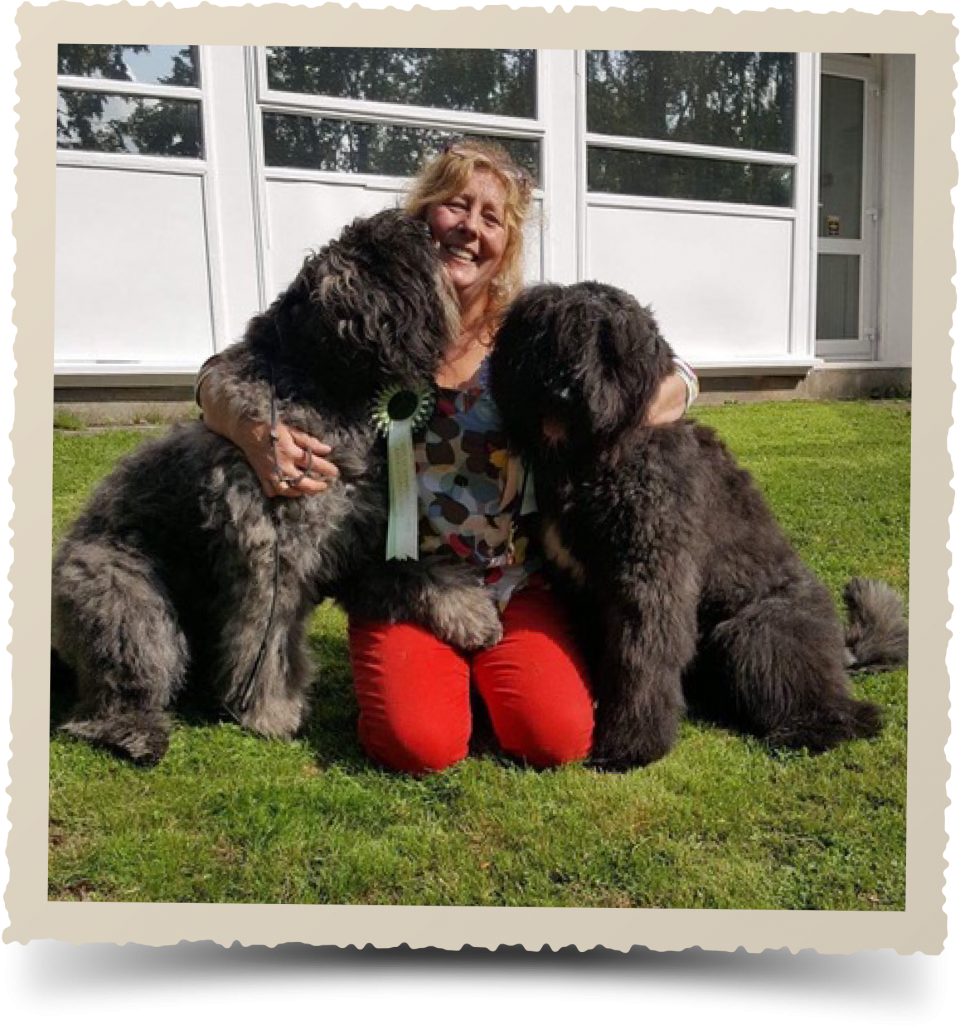 As tempting as it is to expound on my favourite subject, I will try to keep this succinct and useful. At the end of this page, you’ll find some links to respected histories, discussions and breed standards.

The character of a Bouvier

The Bouvier Des Flandres is a practical, no-nonsense working breed, developed by farmers in the Flandres region. Bred to withstand a cold harsh climate and the rigours of an all-purpose farm dog.

The word “Bouvier” simply relates to cattle work. However, the Bouvier Des Flandres was expected to be a lot more. A herder, a guardian, draft dog and a “jack of all trades”. With robust constitution and intelligent sane temperament taking precedence over any beauty requirements.

The calm courage, reasoning ability, agility, and strength also brought the breed into regular use in security work. This remains to this day one of the popular professions for the breed, both competitively and in the Forces.

The breed suffered almost to the point of extinction during both World Wars. Where it’s rugged strength and stoicism were called upon to work alongside allied forces as a stretcher-bearer, draft dog and messenger. By the end of the 1940’s only a handful of Bouviers remained.

Thankfully the breed is now in safe numbers. However in the UK & Ireland can still be considered a minority breed,  with few litters born each year and only a handful of Show Kennels Nation Wide.

How Big does a Bouvier Grow?

Bouviers are a medium breed.  Females around 59cms – 65 cms and 30kgs – 35kgs. Males around 62cms – 68cms and 40kgs – 45kgs. There are larger and smaller, but the Bouvier should never be a giant breed as they lose that special sturdy  ” Bouvier Look” along with their balance and agility when they become too tall.

How Long Does a Bouvier live?

Bouviers tend to be quite a vigorous robust breed, and with a little luck can live well into double figures

What colour are Bouviers?

Bouviers are generally described as brindle. This covers all shades of grey from darkest charcoal through to silver. When shaved, some Bouviers look almost grey tiger stripped. Their colour however changes dramatically over the years. A silver brindle youngster can become dark charcoal by 4 or 5 years old. Grooming also affects colour and “stripping” helps darken the coat, whereas a clipped Bouvier can become lighter due to the effects of the blades on the hair cuticle and the undercoat remaining in the coat. Pure Black Bouviers occasionally occur, and although pretty, tend toward a very soft incorrectly textured coat and are best avoided if you have ambitions to show.

What about Blonde/ Fawn Bouviers?

There is occasionally a blonde puppy in a litter in every kennel and there is much debate about the colour worldwide. Blonde Bouviers can be sought after for their “blonde bombshell” beauty, and are generally as healthy and untroubled as their Brindle litter mates.  HOWEVER  I chose to be guided by the rules and expertise from their FCI country of origin – where Blonde/Fawn Bouviers are incorrect, a disqualifiable fault in the show ring and never to be bred from, or deliberately bred for. Sadly every breed has its share of “greeders” and in the case of Bouviers this tends to be people specifically breeding for the rare blonde colour with no regard for important health and temperament, simply because Blondes command a premium from some customers. Deliberate generations of all blonde breeding has been shown to produce genetic health problems and weakens genetic health. A blonde Bouvier pet can be wonderful, but a conscious deliberate decision to breed from a Blonde Bouvier shows questionable ethics and financially driven motives by the breeder and should always set alarm bells ringing.

Do Bouviers need a lot of grooming?

YES YES YES. In fact there’s so much to be said on the subject I’ve devoted a whole section to it on this site!

Do Bouviers need a lot of exercise?

Bouviers can be the archetypal Couch Potato, especially in later years. They don’t have the high energy intensity of some breeds, but do require regular daily exercise. Probably more so to exercise their extremely high intelligence. A bored Bouvier is an unhappy slob and daily activity, interesting experiences and ideally a “task” to do will keep a Bouvier happy. These are dogs who need to have a purpose, be it minding the children, rounding up the hens, guarding the garden gate or simply escorting you through your daily routine, a Bouvier will take its responsibilities very seriously and be happiest feeling useful.

I work full time, would a Bouvier be ok alone all day?

This really wouldn’t work for a Bouvier (or in all honesty any breed). Bouviers bond deeply with their owner/family, and their biggest requirement in life is to be somewhere near their owner at all times. Make no mistake, a Bouvier may appear to be snoozing on the sofa, but it sleeps with one eye on you always. “Every Move you Make, Every Step you Take, I’ll be watching you ” is the Bouvier mantra, and to exclude a Bouvier from this would produce a very miserable dog.

Are Bouviers easy to train?

Bouviers are very intelligent, have a rare ability to reason and have quite a wicked sense of humour. If you have the ability to work with these attributes you’ll find a Bouvier a breeze to train. BUT

A Bouvier will never be bullied into doing anything it doesn’t see the good sense in doing. If you try to force or browbeat a Bouvier you’ll soon meet that famous Bouvier “stubborn as a mule streak “. You can teach a Bouvier to retrieve easily, however after the 3rd time it brings you that ball you threw down the garden it will look at you in disgust and tell you to fetch it yourself next time. Repetition is pointless to a Bouvier.

Training a Bouvier consists of communication and negotiation and if you always remember your Bouvier believes himself to be responsible for you and your welfare, you’ll get along famously.

A properly socialised Bouvier is never aggressive, mainly because they simply don’t need to be. A quiet “Paddington Bear Stare” from a Bouvier is sufficient to halt all but the most foolhardy. They have a natural reserve toward strangers and don’t have that clownish “every bodies friend” of some breeds, but once politely introduced to a new friend, that person is a friend forever. Equally they are normally cool calm and collected in other canine company, rarely instigating trouble. However if a cheeky canine pushes its luck and takes rude liberties with a Bouvier, the Bouvier WILL finish it. Occasionally you’ll see some macho posturing between some adult males, but that’s exactly what it is – posing and posturing.

I’ve heard that Bouviers are very protective of their owners?

Never was a truer word said, and it still takes me by surprise to this day. On several occasions whilst walking late at night at a ferry port or hotel, a stranger has suddenly appeared out of the darkness. My happy companion ambling along beside me sniffing the hedges has suddenly grown an extra foot in height, placed itself in front of me and let out the scariest, deepest, “Hound of the Baskervilles” Bouvier roar at the unfortunate stranger. No attempt to attack or move, and no need really because the stranger has run away in absolute terror. At which point my companion just goes straight back to sniffing the hedges. A Bouvier can assess a situation, recognise a danger , take appropriate action and go back to being a big cuddly friendly bear all in the time it takes you to even realise there might be a stranger 40 feet away. A Bouvier is the best close protection officer you could ever ask for.

Are Bouviers good with children?

Bouviers have an uncanny affinity for children and delight in their company. They recognise the need to be gentle around smaller children and like to be in charge of groups of children, herding them like a flock of sheep in some cases.

As puppies it’s important to teach a Bouvier to be polite and not over excited with children, but as well socialised adults a Bouvier will be a tolerant and devoted guardian to younger members of the household, spending all day carefully escorting and supervising the “flock” of kids.

Bouviers have a bit of a reputation for flatulence?

This has never been my experience. However I feed a largely raw natural diet and this may well be why the “flatulence ” is minimal. If a Bouvier were fed on a processed readymade dog food brand, which in my opinion is equivalent to a human living on pot noodles and supermarket ready meals, the case could be decidedly less fragrant !

Do Bouviers have many health problems?

As a general rule, Bouviers tend to be a healthy robust breed. Much depends on the care, diet, exercise and management a Bouvier experiences in its first 12 months of life. Over exercise, inappropriate diet and extreme activities can all trigger bone and joint problems in a puppy.

There are some minor ailments such as ear infections and sebaceous cysts (benign and harmless ) that can all be managed with good ear hygiene and grooming practices.

With a little good luck and proper diet and care,  most Bouviers have the prospect of a relatively trouble free life well into old age. I’ve provided health information and links in its own section.

Can a Bouvier live will other small fluffy family pets?

A Bouvier puppy reared with other household pets will present no problem at all and may well become very fond of the family moggy or bunny. BUT

A Bouvier who is unaccustomed to small family pets / livestock etc can prove to have a very high prey drive and may well be lethal to your prize banty’s or the neighbours sheep. A Rural dwelling Bouvier must be taught from a very early age to contain its herding instincts and prey drive, and the introduction of a kitten or bunny to an adult Bouvier household could well end in tragedy.

This site uses cookies. By continuing to browse the site, you are agreeing to our use of cookies.

We may request cookies to be set on your device. We use cookies to let us know when you visit our websites, how you interact with us, to enrich your user experience, and to customize your relationship with our website.

Click on the different category headings to find out more. You can also change some of your preferences. Note that blocking some types of cookies may impact your experience on our websites and the services we are able to offer.

These cookies are strictly necessary to provide you with services available through our website and to use some of its features.

Because these cookies are strictly necessary to deliver the website, you cannot refuse them without impacting how our site functions. You can block or delete them by changing your browser settings and force blocking all cookies on this website.

We also use different external services like Google Webfonts, Google Maps and external Video providers. Since these providers may collect personal data like your IP address we allow you to block them here. Please be aware that this might heavily reduce the functionality and appearance of our site. Changes will take effect once you reload the page.