ABOUT THE MINIATURE SCHNAUZER 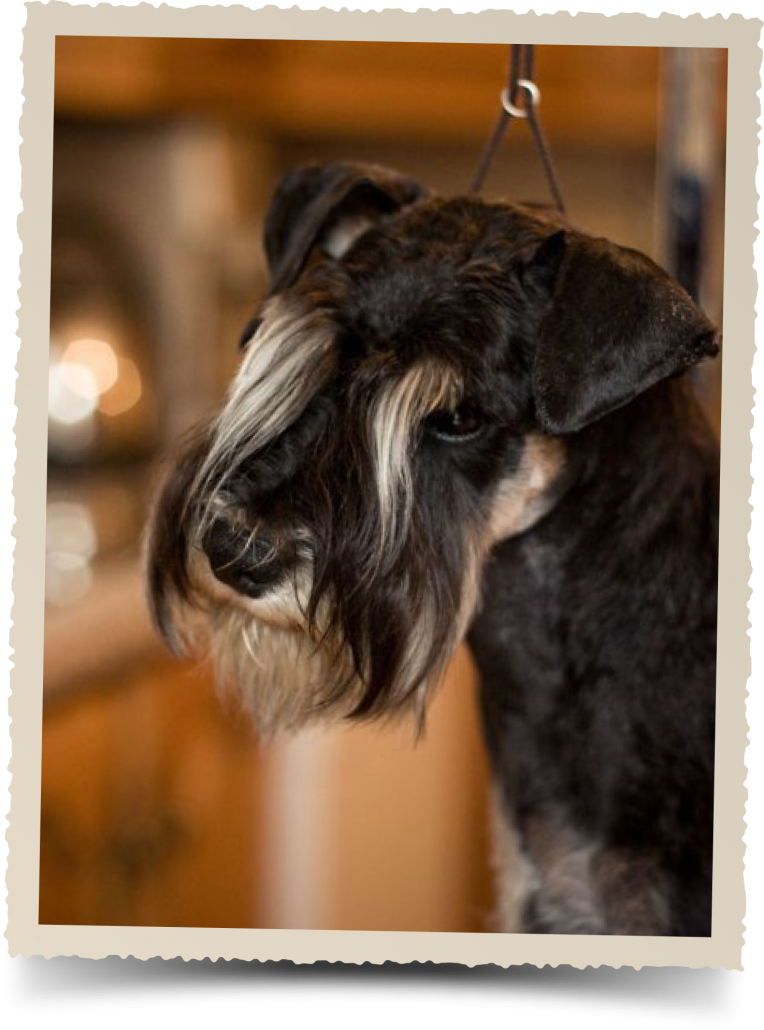 Miniature Schnauzers were originally bred to be farm ratters and guard dogs. They were developed in the mid-to-late 19th century in Germany and it is believed they were the result of crossbreeding the Standard Schnauzer with smaller breeds, such as the Miniature Pinscher, Affenpinscher, and perhaps the Poodle or Pomeranian. In Europe the miniature schnauzer is known as the Zwergschnauzer (zwerg means “dwarf”).

There aren’t any definitive records on how the Miniature Schnauzer was developed, but it seems the intent was to create a smaller version of the well-established Standard Schnauzer. The earliest record of a Miniature Schnauzer was a black female named Findel, born in October 1888. In 1895, the first breed club was formed in Cologne, Germany, although it accepted several types of dogs.

World Wars I and II devastated dog breeding in Europe where some breeds were nearly lost. But interest in Miniature Schnauzers boomed after WWI, and the dog’s popularity has never waned since.

The Miniature Schnauzer today is a great favourite as a family companion, mainly due to its unique smart appearance and splendid character. A “great big dog in a little dogs body”, these little dogs are equally happy playing all day with the children, or snoozing on a lap in front of the TV. Never the shrinking violet, these smart little canines will provide an excellent early warning alarm and vocal guardian of house and home and are quite fearless in the face of those they view as intruders. They are also affectionately devoted to their owners and will quite literally try to creep inside your skin. Life is never ever dull with a Miniature Schnauzer.

Are Miniature Schnauzers easy to train?

Mini Schnauzers are very bright little dogs and any training that involves fun and treats will go very well. Schnauzers can also be incredibly, determinedly stubborn and an owner has to be armed with patience and the ability to “out stubborn” their schnauzer over some issues.

But in general Schnauzers love the attention and company of their owners and will usually be simply delighted to please.

If allowed to be, Yes ! Schnauzers can have a great deal to say for themselves and really like to have the last word in an argument. They are happy to shout at their owners for attention, food, a walk, a cuddle and will go up a few decibels when on guard duty. They can be taught to be polite and quiet and this is best done from an early age.

A properly reared and socialised schnauzer is never aggressive. They are a happy little dog and love lots of human attention so its highly unusual to find aggression unless it’s a very frightened little schnauzer and showing fear aggression. They can be quite assertive with other dogs and have zero awareness of their diminutive size – happily swearing at Great Danes and Rottweiler’s. Something for the owner to guard against in case their mini warrior gets itself into trouble.

Are Miniature Schnauzers good with children?

Miniature Schnauzers love the company of children and all the fun and games that can be had. But extra care should be taken when introducing a puppy to children. Puppies are very small, vulnerable and easily frightened by the high pitched voices and fast movements of young children, and if frightened by or unaccustomed to children, a mini schnauzer can be intimidated, scared and reluctant.

I’ve heard that Miniature Schnauzers are good for people with allergies?

This is something of a myth and is entirely dependent on the type of allergy an individual has. Some people can indeed tolerate Schnauzer hair better than other breeds of dog, however if an individual is allergic to the skin or saliva of a dog, they will react to EVERY breed of dog, including schnauzers. If in doubt my best advice is to visit a schnauzer owner / breeder and spend an hour or 2 cuddling schnauzers. This will quickly answer the question and prevent the mistake of rushing to buy a schnauzer puppy only to discover you can’t live with it and all the heart break of returning it to the breeder.

Do Miniature Schnauzers have many health problems?

Mini Schnauzers from a reputable breeder and with good care, are generally  long lived and robust. There are some unpleasant eye conditions that can affect the breed but reputable breeders follow Kennel Club and Veterinary Health screening protocol and will have the certification for their dogs and puppies.

From experience Schnauzers can create some health problems through their own greed, and good diet management avoiding sugary and high fat foods will help avoid conditions such as – Pancreatitis, Diabetes, Kidney / Urinary stones.

Can Miniature Schnauzers live with other small fluffy family pets?

Puppies reared with other family pets should present no problem at all but always keep in mind the schnauzers historical origins of ” Ratter”. My schnauzers don’t show any interest in ratting, chasing hens or behaving like a terrier, but never say never.

How big does a Miniature Schnauzer grow?

Mini Schnauzers are a small, but never “toyish” breed. They should always be sturdily built.

Weight is usually between 6kgs and no more than 10 kgs.

Mini Schnauzers can have a tendency toward gluttony and if your little pal becomes portly it can be a really useful weight control to replace some of the normal food portion with string beans or chopped carrots. Your Schnauzer will still believe it’s having 2 square meals a day, but the calories will be much reduced.

How long does a Miniature Schnauzer Live?

With a little luck and good diet management, Mini Schnauzers can live well into their teens

What Colour are Miniature Schnauzers?

Do Miniature Schnauzers need a lot of Grooming?

YES ! This is a high maintenance breed in terms of grooming and most people rely on a professional Groomer for regular Schnauzer hair appointments. Weekly home maintenance between grooming appointments is needed to keep Beard and legs knot free and the schnauzer looking smart. Most grooming parlours tend to use clippers on Mini Schnauzers and over time this will change the coat texture and even colour. If you have show aspirations you will need to learn to hand strip with stripping knives to produce the correct coat texture.

Do Miniature Schnauzers need a lot of exercise?

A busy and occupied mini schnauzer is a happy schnauzer. Although these little dogs won’t require hours of exercise every day, they do need the opportunity to stretch their legs and satisfy that schnauzer curiosity. Once they’ve had their morning constitutional they’re quite happy to snooze in a very comfortable place until it’s time for their next leg stretch.

A bored schnauzer can be quite beastly and will find all sorts of destructive mischief to get up to, so regular daily activity is a must.

I work full time, would a Miniature Schnauzer be ok alone all day?

In a word – NO. A miniature schnauzer needs companionship and activity. Left alone all day the schnauzer would be lonely, bored, miserable and would develop some very undesirable habits and behaviours through no fault of its own.

Are Miniature Schnauzers easy to train?

Mini Schnauzers are very bright little dogs and any training that involves fun and treats will go very well. Schnauzers can also be incredibly, determinedly stubborn and an owner has to be armed with patience and the ability to “out stubborn” their schnauzer over some issues.

But in general Schnauzers love the attention and company of their owners and will usually be simply delighted to please.

This site uses cookies. By continuing to browse the site, you are agreeing to our use of cookies.

We may request cookies to be set on your device. We use cookies to let us know when you visit our websites, how you interact with us, to enrich your user experience, and to customize your relationship with our website.

Click on the different category headings to find out more. You can also change some of your preferences. Note that blocking some types of cookies may impact your experience on our websites and the services we are able to offer.

These cookies are strictly necessary to provide you with services available through our website and to use some of its features.

Because these cookies are strictly necessary to deliver the website, you cannot refuse them without impacting how our site functions. You can block or delete them by changing your browser settings and force blocking all cookies on this website.

We also use different external services like Google Webfonts, Google Maps and external Video providers. Since these providers may collect personal data like your IP address we allow you to block them here. Please be aware that this might heavily reduce the functionality and appearance of our site. Changes will take effect once you reload the page.